0
was successfully added to your cart.

‘Twas Our First Night Out Camping 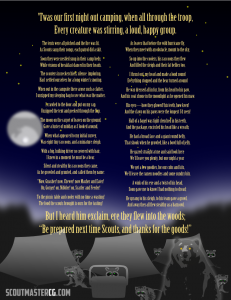 ‘Twas our first night out camping, when all through the troop,
Every creature was stirring, a loud, happy group.

The tents were all pitched and the fire was lit,
As Scouts sang their songs, each patrol did a skit.

Soon they were nestled snug in their camp beds;
While visions of breakfast danced in their heads.

The scouters in neckerchiefs, silence imploring,
Had settled ourselves for a long winter’s snoring.

When out in the campsite there arose such a clatter,
I unzipped my sleeping bag to see what was the matter.

I crawled to the door and put on my cap,
Unzipped the tent and peeked through the flap.

The moon on the carpet of leaves on the ground,
Gave a luster of midday as I looked around,

When what appeared to my initial survey,
Was eight tiny raccoons, and a miniature sleigh.

With a big, hulking driver so covered with hair,
I knew in a moment he must be a bear.

Silent and stealthy his raccoons they came,
As he growled and grunted, and called them by name:

“Now, Gnasher! now, Chewer! now Masher and Eater!
On, Gorger! on, Nibbler! on, Scarfer and Feeder!

To the picnic table and cooler with no time a-wasting!
The food the scouts brought is ours for the tasting!

As leaves that before the wild hurricane fly,
When they meet with an obstacle, mount to the sky;

So up into the coolers, his raccoons they flew
And filled the sleigh and their fat bellies too,

He was dressed all in fur, from his head to his paw,
And his coat shone in the moonlight as he opened his maw.

His eyes—how they glowed! his teeth, how keen!
And the claws on his paws were the longest I’d seen!

Half of a bagel was tight clenched in his teeth,
And the package, encircled his head like a wreath;

He had a broad face and a giant round belly,
That shook when he growled, like a bowl full of jelly.

He gazed straight at me and said look here
We’ll leave you plenty, but one night a year

We get a few goodies, for our cubs and kits,
We’ll leave the ramen noodles and some sundry bits.

A wink of his eye and a twist of his head,
Soon gave me to know I had nothing to dread;

He sprang to his sleigh, to his team gave a growl,
And away they all flew silent as a barn owl

But I heard him exclaim, ere they flew into the woods;
“Be prepared next time Scouts, and thanks for the goods!”

News and Updates Regarding the Goings-on of Pack 536